But we are relocating everything from this site to 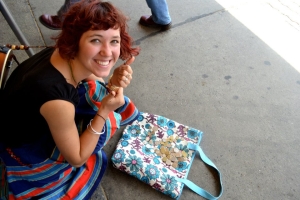 Scarlet was a musician, singer, writer and traveller and was a passionate believer in social justice – and a student at The University of Melbourne studying Arts. She squeezed an extraordinary amount into her life and was much loved by all who knew her. On March 31st, 2012, Scarlet fell through a roof at a party in Melbourne. She died of her injuries five days later on April 5th, just before her 21st birthday.

Scarlet is the daughter of Simon Spain and Victoria Ryle and sister of Georgia (01.10.1993). This fund has been established by them in her name to support some initiatives that she would be proud of and to continue the tradition of bringing beauty through the arts to people, particularly in developing communities.

Scarlet' Fund is a community in the name of Scarlet Spain that supports creative projects in developing communities.